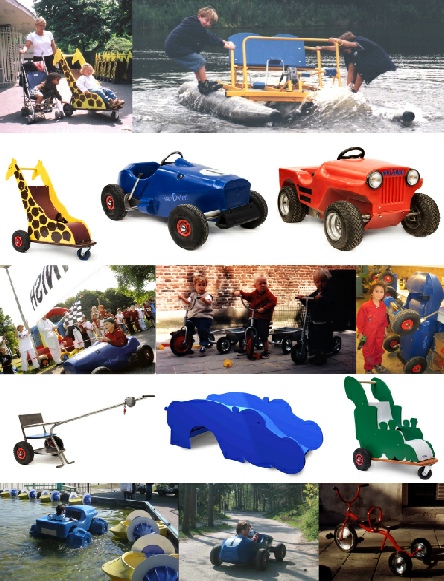 The designs are produced in Europe for the best quality and lowest price. With garanties of 5 - 10 years, Van Dalen Products become long lasting and well known.

In the year 2000 the name was changed to Van Dalen Products. Because the main focus became on quality fabrication: such as trolleys, go-carts and pedal boats.

The prototype of the Bugatti Quatro is produced in the year 2001. This go-cart is tested and updated, with three international patents on the transmission, suspension and steering. This little car is specially designed for children of 5 till 8 years.

De Tamaran Pirat is introduced in the year 2002. This product was specially designed for Plopsaland Belgium, a proud quality product from the Netherlands.

In 2003 the first Bugatti Quatro´s are produced and Van Dalen starts with a bigger model , the mini Jeep.

New designs were introduced that year, the Jeep Petrol a product for boys above 18 years.

In the year 2007 several water vehicles for one person are tested and the Jeep Aqua is ready but never produced, probably the customers find it to odd looking. This year in June the Kiwanis Race Rotterdam was organised for the 3th time, and one month later Van Dalen Products moved to the Sydneystraat in Rotterdam.

In that year of 2007, Van Dalen presented itself on the recreatie Vakbeurs in Gorinchem, where the first prototype of the innovative Square Game was presented.

At the Leisure trade fair in Ahoy 2008 the new Jeep Petrol was presented, and the Square Game was for the second time shown on the Recreatievakbeurs in Gorinchem.

In 2010 Van Dalen starts with the drawings/design of the Speedy, so in 2014 the first Speedy Martina's are produced, as well as the Alfa Rider a first wooden kitcar on the Dutch market.

In 2016 the Darlenys pedalboat was invented. At the end of 2017 the rotation mold was ready at RDM Innovation Dock. In 2018 the first Darlenys boats were made and we introduced the EV version, which is semi electric and was tested on the Nord Sea.

In 2019 we produced even more Darlenys boats for Portugal an Angola. And started with the Ahoy series mold, which is expected to be ready in this anniversery year 2021.